What To Do If You Are In A Car Accident. 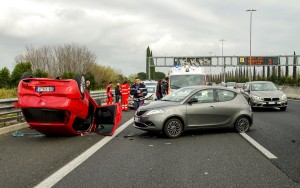 Don’t Leave the Scene of the Accident

When you are in an automobile accident, regardless of who is at fault, lives could be on the line. If you have access to a phone, call 911 immediately. If not, try and wave down the next passing vehicle. Nothing is more important than the health and safety of all those involved in the accident and the sooner you can get medical professionals on the scene, the more lives that will be saved.

Put Your Cell Phone in Your Pants Pocket

A cell phone will not do you much good if you cannot find it. The problem with leaving your cell phone on the seat of your car or on the center console is that in the event of a violent collision it will probably get lost. If you had the foresight to turn off your cell phone and put it in your pants pocket before getting into the car you will know exactly where it is and you can make that life-saving 911 call. Sometimes others not involved in the accident will stop and can make that 911 call for you, but you cannot rely on that. Often you will be the only car involved or there will be only one or two others and everyone must take responsibility for making that initial 911 call.

If anyone other than the police asks you questions you should remain silent. Sometimes an insurance adjuster can be on the scene as fast as an ambulance and they will attempt to get you to make incriminating statements. Don’t let another draw you into an argument as to who was at fault. Insurance adjusters, even the ones from the company that holds your policy, are not your friends and work for the insurance company. In the event of an accident, their job is to eliminate or minimize the amount of money that the company must pay. Do not talk to insurance adjusters.

After you have made that 911 call and administered first aid to others it would be a good idea to call the Connecticut personal injury lawyers at Eagan, Donohue, Van Dyke & Falsey, LLP’s. Our firm is comprised of Connecticut automobile accident lawyers who have handled numerous wrongful death matters and injury claims arising from any and all automobile accident situations.